With elections to the 70-member Delhi assembly less than a month away, the BJP, Congress and AAP are busy sharpening their respective poll strategiesfrom candidate selection to the election campaign to working out the caste arithmetic. Not only will the Delhi election kick off the first electoral contest of 2020, it also comes after the BJP lost power in five states last year and performed below par in a sixth. It will also set the stage for elections in six states in the next 18 monthsBihar in the second half of this year, and Tamil Nadu, Kerala, Puducherry, West Bengal and Assam in 2021.

Candidate selection is the primary challenge for all three rivals. The fact that it is being micro-managed by the national heads of both the Congress and BJP underlines the significance of winning the national capital. The BJP brass has held back-to-back marathon sessions, chaired by no less than the Union minister for home Amit Shah, to finalise the candidates. In the Congress camp, party president Sonia Gandhi herself led the discussions on the party candidates. AAP has retained 46 MLAs, dropped another 15, and included 24 new names. It is also fielding Atishi, Raghav Chadha and Dilip Pandey, who contested the 2019 general election, but lost.

Arvind Kejriwal remains the fiercest challenger of the BJP in Delhi. The AAP leader successfully rode out the Modi wave in 2015 and led his party to a thumping majority in the assembly poll, winning 67 of the 70 seats and cornering 54.3 per cent of the vote share.

In 2020, however, the chief minister cannot take Delhi for granted. For one, AAP’s vote share dropped to 26 per cent within two years, going by the results of the election for the Municipal Corporation of Delhi in 2017. It also finished last in the triangular race in the 2019 general election, its vote share dipping to 18.1 per cent from 33 per cent in 2014. In contrast, the vote share of the Congresswhose support base had shifted en masse to AAPjumped from 15 per cent in 2014 and 10 per cent in 2015 to 23 per cent in 2019. The BJP swept all seven Lok Sabha seats in the state in 2014 and 2019. The saffron party was leading in 65 of the 70 assembly segments in 2019, the Congress in the remaining five while AAP was nowhere. While the vote share of the BJPthe third party in the contestremains constant at over 30 per cent in all the elections, the Congress just needs to maintain its 2019 vote share to make the Delhi contest triangular. However, any swing in votes from AAP to the Congress will favour the BJP in a close contest as it will mean a division of the non-BJP vote. In 2019, for instance, the votes of both the Scheduled Castes and Muslimsthe only two communities that by and large do not vote for the BJP, were split between the Congress and AAP. In 2015, AAP won 10 seats where the victory margin was less than 10 per cent of the total valid votes polled. In another 22 seats, the margin was less than 20 per cent. The challenge for Kejriwal next month is to retain his hold in these consti­tuencies.

One way AAP is trying to do so is through a strategic change in campaign policy. Guided by election strategist Prashant Kishor, AAP has decided to fight the election on its good governance’. On January 6, within minutes of the Election Commission of India ann­ouncing the dates for the Delhi election, Kejriwal posted on Twitter: Yeh chunav kaam par hoga (This election will be fought on performance). 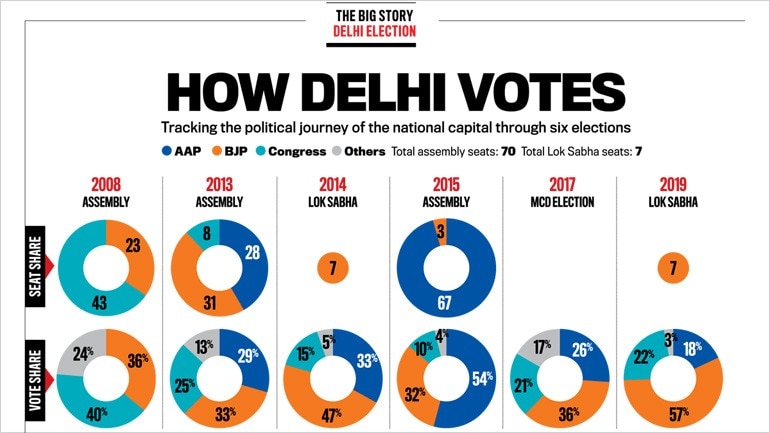 The budget of the Delhi government has doubled from Rs 31,000 crore to Rs 60,000 crore, with nearly two-fifths of it going to education and health in the past five years, says an AAP leader who also works with the government. The party is banking on initiatives such as the mohalla clinics, the happiness curriculum and the improvement in public school infrastructure to win a second term in Delhi. In the past six months, the Kejriwal government has been on a sop announcement spreefree rides for women in DTC buses; free electricity up to 200 units and a 50 per cent subsidy on consumption of up to 400 units; installation of CCTVs and free WiFi.

Of course, the BJP is having no trouble playing catch-up. Party leaders, including the prime minister, are advertising the passage of a bill in Parliament for the regularisation of nearly 2,000 unauthorised colonies in Delhi.

Kejriwal, while playing up the of his government, is being careful not to make any personal attacks on Prime Minister Narendra Modi. He was among the first opposition leaders to support the Union government’s dissolution of Kashmir’s special status under Article 370. And even though Delhi has been the epicentre of protests against the Citizenship (Amendment) Act, or CAA, 2019, Kejriwal has only questioned the timing of the legislation in interviews, and not made it an election issue yet. He (Kejriwal) thinks the issue is polarising people only on television screens, it will not have an impact on the polls, says a leader who works with the CM. Also, rather than present himself as a challenger to Modi, Kejriwal is pitching himself as someone who wants to govern Delhi better. Delhi elections will be fought on local issues, says AAP Rajya Sabha member and Delhi election in-charge, Sanjay Singh. We saw how national issues did not resonate in the Maharashtra and Jharkhand polls.

What also gives Kejriwal and AAP an edge over the Congress and BJP is that both national parties have refrained from announcing their chief ministerial candidate. Unlike in Jharkhand, where it fought under the leadership of Raghubar Das, the BJP is not naming a chief ministerial candidate in Delhi to prevent infighting among the several claimantsstate president Manoj Tewari, Union minister Harsh Vardhan and MPs Vijay Goel and Parvesh Verma. Instead, the BJP has announced it will contest the Delhi election in the name of Prime Minister Modi. They have also learnt a bitter lesson from the 2015 poll, when the party announced Kiran Bedi as the CM candidate against Kejriwal, but she could not win even her own seat. Many insiders said the party’s grassroots workers were demoralised that an outsider had been thrust upon them. With a below-par performance in Haryana and Maharashtraafter a spectacular showing in the general electionand the loss in Jharkhand, the BJP is revisiting its poll strategy in Delhi. In both Haryana and Maharashtra, the Congress had been a key player, and attacking Rahul Gandhi yielded results. But the battle for Delhi will be like the one in Jharkhand, where the BJP was pitted against regional stalwarts. The party has, therefore, pinned its hopes on the CAA to deliver Delhi. The saffron party is expecting to benefit from the polarisation around the legislation. Even though conventional wisdom has it that state and national elections are fought on different issues, BJP sources believe the CAA is one national issue that can have regional resonance, that the anti-Muslim dimension of the new Act will consolidate their Hindu vote. The Congress, on the other hand, is hoping to gain from the anti-CAA mobilisation, particularly among the young and the Muslims. The latter made up 12-13 per cent of Delhi’s population in 2011. If they vote en bloc, Muslim voters can influence the outcome of the Delhi assembly election in about 10 seats. However, the Congress still has to resolve its leadership issue. The party does not have one charismatic local leader with mass support and strong organisational abilities.

The three parties also need to get on top of the caste equations. The Purvanchali votersmigrants from eastern Uttar Pradesh, Bihar and Jharkhandcomprise 25-30 per cent of the electorate and can influence results in about 25 constituencies. While the BJP has Bhojpuri actor and state unit president Manoj Tewari as a Purvanchali strongman, the Congress has inducted Kirti Azad, the former Indian cricketer from Bihar, to woo them. AAP hopes to maintain its comprehensive victories in Purvanchali-dominated constituencies on the strength of its work on the ground.

The BJP, which has maintained its 30-plus per cent vote share since the 1990s, draws its traditional support from upper-caste Hindus, who account for 40 per cent of the electorate12 per cent Brahmins, 7 per cent each of Punjabi Khatris and Rajputs, 6 per cent each of Jains and Baniyas, and 8 per cent of the restaccording to a report by the Centre for the Study of Developing Societies (CSDS) in Delhi.

The Punjabi voter, who makes up around 35 per cent of the Delhi electorate, can influence the election outcome in 25 seats; Sikh voters can impact nearly 15 constituencies. The caste arithmetic will certainly play a major role in the ticket distribution of all three parties.

Delhi may not be a full-fledged state, but elections to its assembly have national significance. If Kejriwal retains power, he will be counted among the top opponents of the BJP. Another state loss for the BJP, amid nationwide protests against the CAA, will massively compromise the saffron party’s political strength to push through its ideology-driven agenda.

In the event of a hung assembly, where the Congress is required to prop up an AAP government, it will add one more state to the party’s kitty, signalling a slow but significant revival in its fortunes. But if the BJP dethrones Kejriwal and forms a government, it will be seen as a mini vote for the CAA. It will also be a psychological boost for the BJP in the run-up to the Bihar election this year.