The Madhya Pradesh government has an ambitious plan to create at least 11 new protected areas within the state. The state is currently home to 24 sanctuaries and 11 national parks, covering 11,393 sq. km of forests. These new protected areas, covering about 2,143 sq. km, represent perhaps the largest addition of protected areas attempted by any state in the past three decades.

After an initial push in the 1970s and ’80s, the creation of new protected areas took a backseat. This was largely due to resistance from local communities who felt that their rights would be curtailed, as well as concern on the part of governments that protected areas would be detrimental to development’, as a result of the many clearances required. However, emboldened by the success of its tiger protection programme, the 2018 tiger census recorded 526 big cats in the state, the highest in the country, earning MP the tag of India’s tiger state’, the state government has decided to create new protected areas. These new areas have been dubbed designer sanctuaries’ by policy-makers, as they have been identified while keeping potentially contentious aspects such as human habitation and minor forest produce (MFP) collection rightsin mind. The proposal prepared by the state forest department and being put to the cabinet involves the creation of 10 new sanctuaries and one new national park. At the same time, the Ratapani sanctuary is to be accorded the status of tiger reserve’, while two more, one in Mandla, specifically to protect the rock python, and another in Satna could also make it to the final list.

Aside from the existing 11,393 sq. km of sanctuaries and national parks in the state, about 5,400 sq. km of forests have been notified as buffer areas around the six tiger reserves in MP, taking the total protected area to just under 16,800 sq. km of the state’s approximately 94,000 sq. km of forests. While most of the state’s well-known tiger reserves, Satpura, Pench, Panna and Bandhavgarh were notified in the early ’80s, along with the bulk of MP’s sanctuaries, the past 30 years did not see much by way of addition of protected areas. The only exception was the creation of two sanctuaries, Rani Durgawati and Orchha in the mid-1990s, aside from the creation of an animal fossil national park in Dhar district and the conversion of the Palpur-Kuno sanctuary to a national park.

A major challenge in creating new protected areas comes from the fact that the creation of such an area extinguishes the rights of the local population living within it. For instance, if an area is notified as a sanctuary or a national park, those who own land within that area lose the right to sell it. There are also curbs on cattle grazing and the collection of timber for firewood or MFP like mahua or tendu leaves. Over the years, new regulations were legislated for those living around such protected areas. As a result, after the initial round of creation of protected areas, local communities began opposing them. For their part, governments see protected areas as a hindrance to development. For example, even repair work on a road passing through a protected area can be done only after securing permission from state and national wildlife boards, often resulting in major delays. The creation of new reserves, therefore, risks turning people against the government.

Aware of this issue, the MP government has used information technology to identify areas that do not contain private land and habitations for the new sanctuaries. Moreover, since the areas to be included are already designated as reserve forests, the state government does not need to carry out the settlement of rights’ process that is mandated under the Wildlife Protection Act, 1972. This allows the government to avoid the contentious process of public consultation. The creation of a sanctuary goes through a process listed in sections 18 to 26 of the Wildlife Protection Act, says additional chief conservator of forests J.S. Chauhan. Since the bulk of the areas selected for inclusion are [already] designated as reserve forests, the process of public consultation where the district magistrate conducts the process of rights settlement under section 19 is not required. 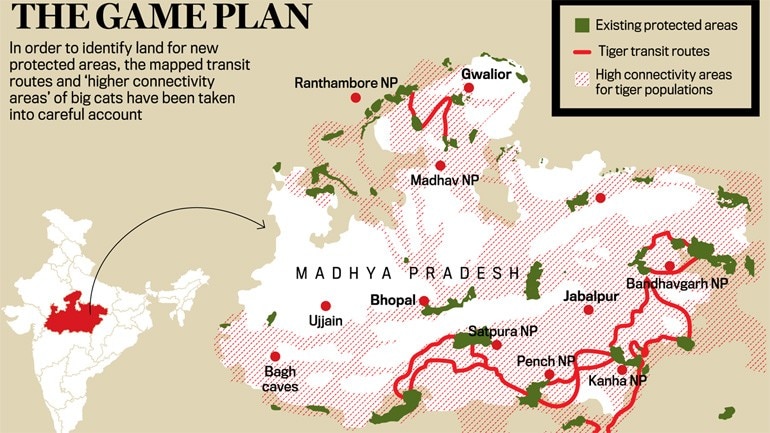 Graphic by Tanmoy Chakraborty, data from wildlife trust of India

Using the UN’s biodiversity intactness index and a study on available habitat corridors, the state forest department headquarters has identified contiguous reserve forest tracts across the state and asked the relevant forest divisions to corroborate the data with the situation on the ground. The state government is also carrying out a study to assess revenue loss, as the felling of timber, harvesting of bamboo and mining in these areas will end once these lands are converted to protected areas. High resolution satellite imagery has also been used to identify the areas with human habitation and road networks so that these can be left out of the proposed protected areas. About 5 sq. km of forests around habitations have been kept out of the proposed sanctuaries to allow people to continue using the forests for nistar needs such as firewood or MFP collection, says state forest minister Umang Singhar.

However, the excising of habitations from the proposed protected areas has a flip side most sanctuary proposals have seen a reduction in their areas by 50-70 per cent. In Dhar, for example, of the proposed 400 sq. km, only four sq. km have been finally accepted. Further, the areas being prioritised for approval include dry areas and those with no mining or agricultural activity.

The state government has also decided to upgrade the Ratapani sanctuary into a tiger reserve, making the 763 sq. km sanctuary the seventh tiger reserve in the state. Per the latest census, it already has a population of more than 20 tigers. To turn Ratapani into a tiger reserve, a buffer area would have to be notified around the sanctuary, as mandated by the Wildlife Protection Act, after which it will begin receiving financial assistance from the Centre.

Sources in the state government say that these new reserves will protect both tigers and forests and also allow a growth of the tiger population, the existing reserves appear to be at capacity. The increase in tiger population is expected to open up more areas for tourism, a sector that chief minister Kamal Nath has identified as a focus area for creation of jobs. And while wildlife activists may disagree with the chief minister’s focus on tourism, they cannot possibly oppose the move to create more reserves.

Get real-time alerts and all the news on your phone with the all-new India Today app. Download from