Ten years after Indian telecom was rattled by the 2G spectrum scam and the Supreme Court cancelled 122 licences issued by the UPA government in 2008, the sector is witnessing another upheaval. This time, the apex court has stepped in to ensure that telcos Bharti Airtel, Vodafone Idea and Tata Teleservices pay up over Rs 1 lakh crore in revenue share the government claims they owe in return for acquiring licences and spectrum. The three companies are widely referred to as the ‘incumbent’ players, since the other major operator, Reliance Jio, entered the market only in 2016. According to the Department of Telecommunications (DoT), which issues the licences, the three incumbents owe the government Rs 35,600 crore, Rs 53,038 crore and about Rs 14,000 crore, respectively.

On February 17, three days after the Supreme Court pulled up telcos for not abiding by its January 16 order to clear the dues, Vodafone Idea made a Rs 2,500 crore part-payment to the DoT, with the assurance that it will pay another Rs 1,000 crore by February 21. Bharti Airtel said it had paid Rs 10,000 crore to the DoT while Tata Teleservices paid Rs 2,197 crore.

While the telcos have sought relief from the hefty payments, Vodafone Idea’s case is particularly complicated, with the court rejecting its plea that the DoT be directed not to invoke the company’s bank guarantees-reportedly about Rs 2,500 crore-to recover dues. “I hope good sense prevails over the government that if it encashes the guarantees, the banks will pay, but the company will go down,” Vodafone Idea’s counsel Mukul Rohatgi told a TV channel.

Industry observers say if Vodafone Idea shuts down, the consequences will be drastic. “It will be a terrible thing for the economy, the banking system, the telecom industry and its customers, suppliers and digital partners,” says a telecom official, requesting anonymity. “Unlike airlines, where the supply breach caused by the closure of, say, Jet Airways could be filled by other players, in telecom, capacity cannot be replaced, including the enormous physical infrastructure. In such cases, the executive should wield its powers and step in to save the operator.”

The industry expects the government to allow it an extended moratorium to make the payments, to redefine Adjusted Gross Revenue (AGR), or even waive interest and penalties, and to stick to the principal amount to be paid. The incumbents and the DoT have been waging a legal battle for around 15 years. The crisis points to ambiguities in policy, which have not only caused confusion, but also left loopholes for telcos to exploit. The government’s handling of the telecom sector has also come under question. What was a sunrise industry now sees players, except Reliance Jio, battling for survival. It all threatens to end in a duopoly that could send tariffs skyrocketing.

The telecom sector was liberalised under the National Telecom Policy, 1994, paving the way for the entry of private players. For a fixed fee, licences were issued in various categories-unified licence, which allowed a firm to offer both wireless and wireline services; licences to Internet Service Providers (ISPs); and licences to provide passive infrastructure, such as towers and fibre. In 1999, the NDA government gave licensees the option to migrate to the revenue-sharing fee model.

As per the model, telecom operators were to share a percentage of their AGR with the government as annual licence fee and spectrum usage charges. The licence fee was pegged at 8 per cent of AGR while the spectrum usage charges were fixed at 3-5 per cent. According to Clause 19.1 of the Draft Licence Agreement, gross revenue included installation charges, revenue on account of interest, dividend, value-added services and so on. Calculated on this basis, AGR excluded certain charges, such as the Interconnection Usage Charge (IUC) and roaming revenues that are passed on to other operators.

While the DoT says it is following the definition of AGR as per the licence agreement, industry sources claim the definition of AGR in the licence conditions underwent revisions regarding the applicable rates for licence fee and spectrum usage charge. While operators wanted to be charged on the basis of their core business, involving use of the spectrum allotted, the DoT said the definition of AGR includes other items, such as dividend, interest, capital gains on sales of assets and securities and gains from foreign exchange fluctuations. In 2001, the Association of Basic Telecom Operators submitted to the government that non-operational income should not be included while computing AGR. However, in 2002-2003, the DoT demanded revenue share as per the Draft Licence Agreement, following which operators approached the Telecom Disputes Settlement and Appellate Tribunal (TDSAT). 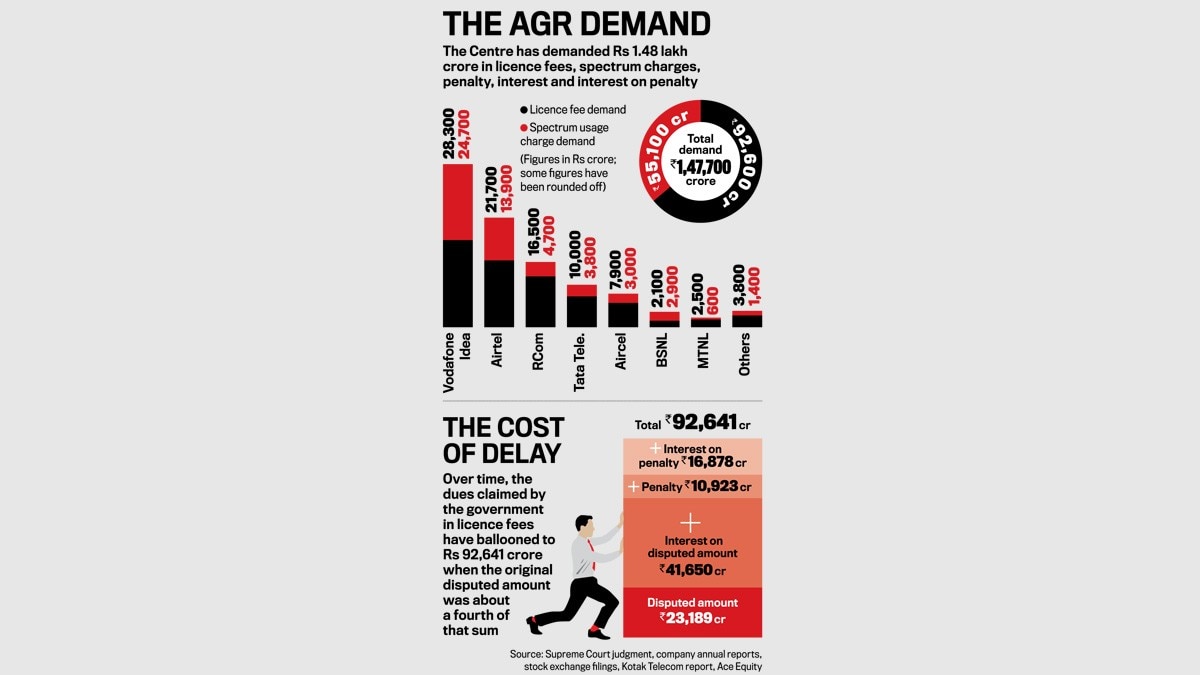 A long-drawn-out legal battle followed. Around the same time, the telcos stopped paying their revenue share on the disputed part of the AGR. Operators argued that taxes and levies in India were among the highest in the world and appealed to the government not to press for payment of AGR-based dues. The industry’s contention is that it pays the government Rs 30 for every Rs 100 earned, in the form of levies and taxes. GST is at 18 per cent, and the industry has been demanding that the licence fee be reduced to 3 per cent, and the Universal Service Obligation Fund (USOF) charge to 3 per cent from the current 5 per cent. USOF was created in 2002 to expand internet and mobile connectivity in rural areas. In August 2019, the Cellular Operators Association of India (COAI) alleged that half the funds raised by USOF between 2002-03 and 2018-19 remained unutilised.

In 2015, the TDSAT ruled that AGR includes all receipts except capital receipts and revenue from non-core sources. But on October 24, 2019, the Supreme Court set aside that order and upheld the DoT’s definition of AGR. The incumbents approached the court for a review, but the plea was rejected on January 16 this year. However, the Supreme Court agreed, on January 21, to take up a modification plea filed by the telcos, seeking to negotiate a ‘sustainable payment schedule’. This followed the Union cabinet’s decision on November 20, 2019, that telcos be given a two-year moratorium on payments.

However, on February 14 this year, the Supreme Court slammed the telcos over unpaid dues and warned of contempt proceedings if they did not pay up by March 17. “The companies have violated the order passed by this court in pith and substance,” said the court. “In spite of the dismissal of the review application, they have not deposited any amount so far.” Following the Supreme Court rap, the DoT asked the telcos to pay the AGR dues by the end of day on February 14.

As per reports, the original disputed amount of about Rs 23,000 crore snowballed to the present figure of close to Rs 1.5 lakh crore as the DoT contended that the entire dues accumulated over the past 15 years be paid with interest and penalty.

The Supreme Court was of the view that telecom players benefited immensely from the DoT’s formula of AGR calculation. In its October 24, 2019, order, the court said the “revenue-sharing package turned out to be very beneficial to the telecom service providers, which is evident from the continuing rise in the gross revenue”. Gross revenues earned by telecom service providers stood at Rs 4,855 crore in 2004, Rs 89,108 crore by 2007, and subsequently touched Rs 2,37,676 crore in 2015, said the court.

“The industry is reeling from the Supreme Court decision on AGR. It has further aggravated the already precarious financial position of operators,” says Rajan Mathews, director general of COAI. “The ball is now firmly in the government’s court to fix the vexatious AGR problem, by either eliminating it altogether or redefining it along the lines recommended by the Telecom Regulatory Authority of India and the industry, as well as reduce the licence fee and spectrum usage charge to 3 per cent and 1 per cent, respectively. We believe AGR is an anachronism in a day when operators have paid for spectrum and licences upfront.”

As of January, TRAI pegs Reliance Jio as the largest telecom player, with 369 million mobile subscribers, followed by Vodafone Idea (336 million) and Bharti Airtel (327 million). ‘The increase in Jio’s subscriber base is largely at the cost of the fall in Vodafone Idea’s subscriber base,’ says a report by India Ratings & Research. While a Vodafone Idea spokesperson refused to comment, company sources said the board had assessed the company could pay up Rs 3,500 crore without delay, of which Rs 2,500 crore was paid on February 17. Vodafone Idea’s assessment of its dues to the government is “significantly different” from the government’s claim, the source says. For part payments of dues, the company can dip into its cash reserves without affecting its working capital needs. Also, the Indian subsidiary can ask the parent Vodafone Plc to pitch in with Rs 8,000 crore, the source says. The proposed sale of Indus Towers, a telecom infrastructure firm jointly promoted by the Bharti Group and Vodafone Group, would also help. 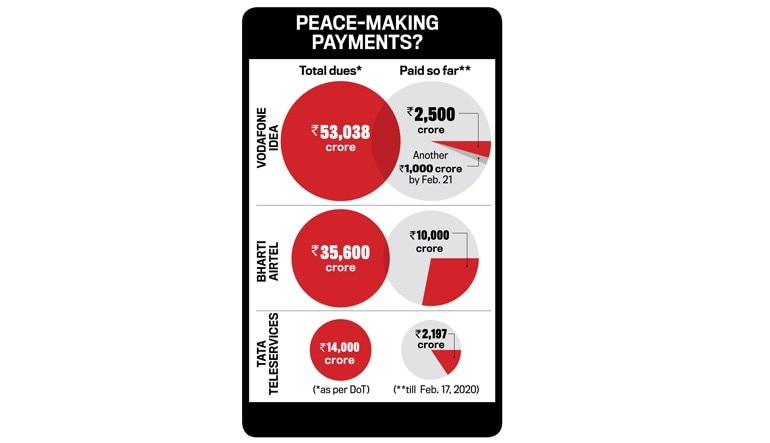 In a February 17 letter to member (finance), DoT, Bharti Airtel director-legal Vidyut Gulati said that of the Rs 10,000 crore paid, Rs 9,500 crore was on behalf of Bharti Airtel and Rs 500 crore on behalf of its subsidiary, Bharti Hexacom. ‘We are in the process of completing the self-assessment exercise expeditiously and will duly make the balance payment upon completion of the same, before the next hearing in the Supreme Court,’ says the letter, which india today has seen. While a Bharti Airtel spokesperson declined comment on the AGR matter, a mail sent to Tata Teleservices went unanswered till the time of going to press.

The Supreme Court’s October 2019 directive hit the incumbent telcos hard. The year-to-date losses for Vodafone Idea, Bharti Airtel and Tata Teleservices in FY2019-20 stand at Rs 62,233.8 crore, Rs 26,946 crore and Rs 2,840 crore, respectively. Vodafone Plc has already spent over $17 billion (around Rs 1.2 lakh crore) to buy out Hutch and Essar’s stake in Vodafone Essar between 2007 and 2012, and injected several billions of dollars more to acquire spectrum and build infrastructure. Effective December 1, 2019, Reliance Jio, Vodafone Idea and Bharti Airtel announced tariff hikes, for the first time in five years. According to India Ratings & Research: ‘The average revenue per user (ARPU) reported by telcos has started showing signs of recovery in the last two-three quarters. The recent tariff hikes are likely to support the increase in ARPU over the next few quarters.’

Even if Vodafone Idea tides over the AGR crisis by, say, delayed annual payments over the long term, its weak balance sheet makes it vulnerable, as per an SBI Caps note, to incremental regulatory changes. In a three-player market, that could be a reason for TRAI to go soft on it. ‘But the moment Indian telecom shapes up as a duopoly, the regulator may start perceiving telcos differently. Price hikes, pricing power, spectrum pricing-all…may see the regulator taking a tougher stand,’ the note says. While some analysts foresee a Reliance Jio-Bharti Airtel duopoly and higher tariffs, Vodafone Idea is looking to stay in the fight. “There is hope of some relief in terms of staggered payments [of dues],” says a company official. But the options seem to be running out for the British telco that had entered India betting on its high growth potential.